Set in Northern California’s Sonoma County, the novel is the story of a washed-up ghostwriter of celebrity autobiographies, named Charlie Teller, who gets caught up in the investigation of a friend’s murder.

Charlie teams up with an ex-Special Forces soldier, named Vincent, to investigate Kenny McDonald, a reclusive coke dealer, who may have had a hand in the killing. But Charlie quickly becomes the prime suspect in the eyes of the local police detective, Eddie Mahler, and the target of someone who’s trying to kill him. If that weren’t enough trouble, he’s also drawn into a relationship with the beautiful fiancée of the murder victim.

As he uncovers the circumstances of his friend’s death, Charlie tries to recover his own life, lost through drug addiction and deceit. He looks back on his path through his association with the subjects of his books: an aging novelist, a rock musician, a major league baseball player, an Olympic skater, the drug-addicted daughter of famous parents, a film star, and a classical pianist.

Teller is a novel about memory, choices made, what’s lost and what can be redeemed. 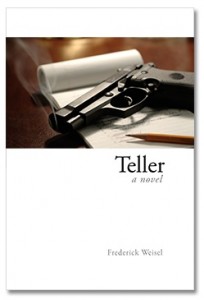 The stoic face, the clockwork training, and the skins hid a frightened child. It was as though she awoke one morning and found the earth beneath her unreliable, as if she forgot how not to fall.